I plan to shoot a lot of pictures of waterfalls this summer, so I need to get a better feeling both for what to expect at various shutter speeds and what effect I prefer. Since we’ve had a lot of rain lately, ensuring lots of water over Minnehaha Falls, it seemed like an ideal place to experiment.

Shooting with a digital SLR gives me a lot of control over the factors that impact shutter speed:

Light: I visited the falls late in the morning on a mostly sunny day. While photographers are often advised to avoid the harsh light of mid-day, I wanted full light on the falls and that only happens later in the morning when the sun is both high enough and aligned to shine into the gorge over the surrounding trees. A few clouds moved in as I shot, allowing me to shoot under various light conditions.

Aperture: I have full aperture control on my camera and can easily adjust it. Most of these shots were taken at a small lens opening of f18 or above. This setting reduced the amount of light coming into my lens, allowing me to shoot at lower shutter speeds even on a bright sunny day. (It also gave me a long depth of field, but I’ll save that for a future post.) Not all lenses are sharp at the smallest opening, but the lens I was using on this outing works pretty well even at very small apertures.

ISO: Like most digital cameras, mine allows me to change the camera’s sensitivity to light. In general, a lower ISO results in a cleaner-looking image with less grain, but for my purposes today the real advantage is that it allows the camera to act as if there is less light present, allowing me to shoot at a lower shutter speed even on a bright sunny day. This allows me to change my shutter speed simply by raising or lowering the ISO setting.

For most shots I used a low ISO and left the aperture set at f18. That allowed me to change the shutter speed simply by adjusting the amount of light coming through the neutral density filter. To get high-speed shots I had the options of increasing the ISO, using a lower aperture setting to open the lens wider, and/or allow more light through the filter.

Here are the results of this test run, as viewed from the bottom of the falls: 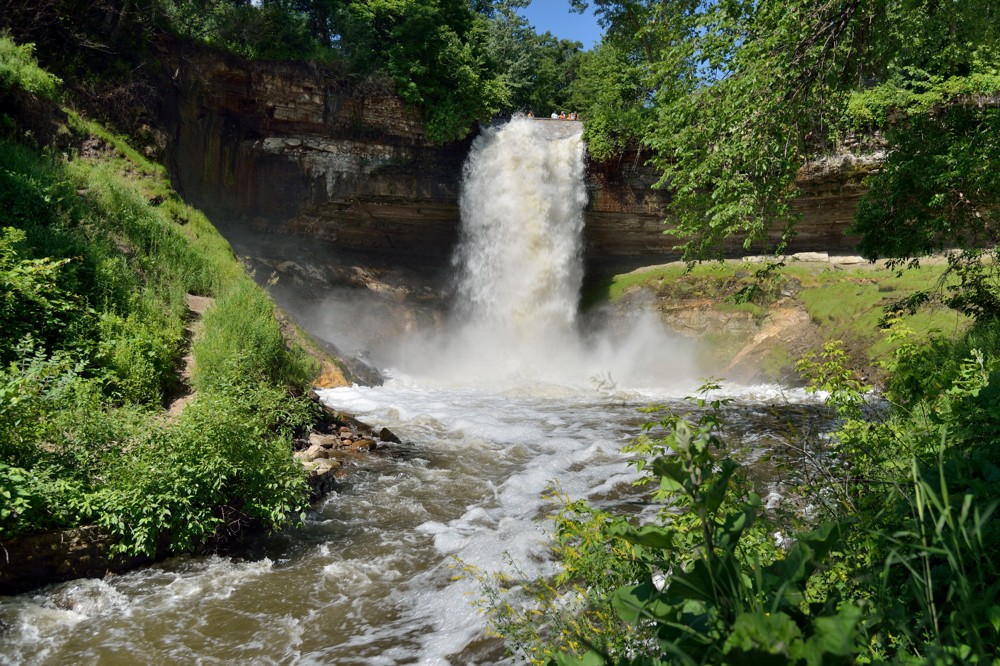 (1.6 seconds was used for the image at the top of the page)

Leaving aside the issue of the people at the top of the falls, which of these is “best” based on  shutter speed is a matter of preference. I’ll end up printing one of the shots taken between 1/8th and 1.3 seconds because I like the amount of texture within the smoothness of the water. If I had to choose one right now, it would probably be the image shot at ½ second, but I’ll make test prints of all three before I decide.

Which one would you choose?